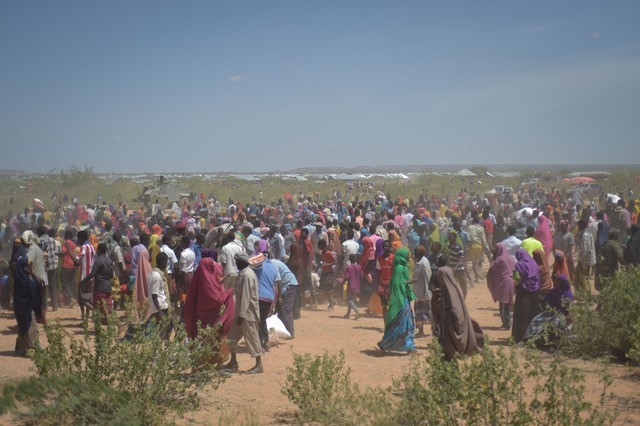 As of 30th March 2022, the BBC reported that the refugees fleeing Ukraine numbered 4 million. The oil price measured by the market for Brent Crude peaked at $120 plus and has settled back to c.$110 per barrel. The global price of grain has spiked by more than 30%. Prices are now feeding through to consumers with inflation expected to hit 10% and climbing at least till autumn 2022.

But that is in the northern hemisphere. The global south is already feeling the pinch. In February 2022 the price of a bar of soap doubled in Kampala, Uganda.  The fears in Kenya around the cost and availability of grain in the face of droughts in the north of the country are profound. The combination of drought in the north and high global grain prices will decimate the pastoralists and hit millions of people – destroying their livelihoods, creating hunger and contributing to migration and social unrest. There are 1.3 million refugees (many from Somalia, S. Sudan and Ethiopia) in Uganda in camps where the dwell time for each family is measured in years. And people are now arriving in large numbers from the Democratic Republic of the Congo where conflict has flared yet again. These people too will be impacted by the situation in Ukraine as aid funds become limited and costs rise.

The global north (with 80% of the world’s income from 20% of its population) is already favouring its own.  While Poland and other European nations have been hugely welcoming of those escaping war in Ukraine, it was not so for the Afghans and Syrians on the Poland – Belarus border a few months ago. The UK is welcoming Ukrainian refugees (subject to visas and bureaucracy) when it is apparently pushing back on those of other ethnicities trying to cross the English Channel in tiny vessels at huge personal risk.

The massive sums raised by public donation to support Ukrainians reflect the emotional connections that are felt about this crisis close to home. But people and governments don’t have bottomless pockets. The reality is that the money is already running out as evidenced by the pre-Ukraine cut in aid by the British Government in the face of Covid debt. The bean counters and treasury officials will put in place constraints on funding – be it UN or national initiatives.

The world’s truly poor (around 1billion people on less than $1.90 per day – 85% of which are in Asiaand sub-Saharan Africa) (and where the number is likely to double in the next year) are about to be sacrificed at the altar of closer interests.

This is not a complaint – no one can ignore the appalling situation in Ukraine and its immediacy and the political pressures to take care of electors at home.

No, it is simply a way to point out forcefully that the current trajectory is unsustainable. It will have unintended and unpredictable consequences. The interconnections of the global economy are complex; agricultural stress, famine and economic collapse will drive conflict, mass migration and terrorism on a scale that we cannot fully anticipate. The implications for global poverty and deprivation are profound but not yet part of the conversation – nationally or globally.

This is a tipping point where things must be done differently. If the global economy cannot sustain the traditional aid structures and funding models, then it is time to adopt alternatives which have already been identified. There is a better way – already widely documented and with many leading advocates. We know what will work; it will be better and cost less.

How can this be? The answer is in actions that drive efficiency and effectiveness. The existing aid and development ‘industry’ has been called out for some years and the evidence is there to support the assertion. Just consider the following:

Cash in the hands of people needing help is better. The work of Nobel Laureates for Economics, Banerjee and Duflo[1], provides clear evidence that transferring cash to people in difficulty and trusting them to set their own priorities is more effective than sending stuff and treating people like victims. The psychology is clear; if you do that, people learn helplessness. Of course, that reinforces the prejudicial stereotype: a kind of colonialism.

Localisation is the route to sustainability. The word localisation is now much used and not to everyone’s taste. However, the big idea is that money should flow to local communities rather than passed through many sets of hands (each taking a cut) for them to decide how to spend it. This idea is enshrined in the Grand Bargain[2], a global agreement on specific targets following on from the United Nations Sustainable Development Goals for 2030 that were set in 2015. The target was set at a modest 25% and, so far, the world has achieved just 3%. It appears that while the principle has been established, the self-interest of the chain that takes its overheads along the way is a major barrier to progress. As the money supply tightens, it will be time to cut out the middlemen. The precedents are clear as this is what so many industries have done.

The power of 4%[3]. A recent paper reported on an evaluation in Malawi that showed that locally funded and organised projects achieved the same (or better) outcomes in wellbeing compared with a top down NGO programme for just 4% of the cost. This is an outcome seen elsewhere with the work of Goonj in India and the writings of Nobel Laureate, Amartya Sen, who focused on the economic impact of wellbeing. The point for any bureaucrats reading this is that 25% of the money channelled directly would likely produce a better result that at present; surely this is a budget opportunity?

Investment not charity. The idea of Impact Investing for sustainability coupled with the work of Jonathan Glennie[4], who is proposing the idea of Global Public Investment, provide an investment perspective to replace charity. There are two big ideas in this perspective. First that achieving sustainability requires upfront investment and can bring a tangible economic return. Second, that public capital needs to be assigned to such investment with a longer-term commitment horizon than is found in what might be described as charitable projects. The experience is that in many cases investments become self-sustaining and move to a commercial footing. These are not easy things to set up, but we are now seeing this happen. Global aid is a $100bn industry but that is dwarfed by the capital that is available in markets and looking for modest but secure returns. The squeeze on public and aid expenditure following Covid and war in Ukraine requires a focus on making this area work better and faster.

‘Wicked’ problems require ‘clumsy’ solutions. There are hundreds of thousands of governmental, quasi-governmental and non-governmental organisations in the aid and development industry addressing the fundamental issues of humanity across the 17 sustainable development goals. This is a wicked problem;  the term is coined to convey a level of complexity where the relationships between inputs and outputs are ill defined and can create second and third order effects. The combination of models, analysis and policy will not produce reliable outcomes. These are ‘wicked’ problems. The idea is not new; Rittell and Webber introduced it in 1973[5]. The problem with wicked problems is there is no one ‘right’ solution and no ‘best’ organisational orientation. There will be many dimensions (technical innovation, organisational models and behaviours) on which progress can and needs to take place. There will be apparent inconsistencies and misperceptions. This is inevitably ‘clumsy’; the breakthrough idea is that global society should actively promote this state, embrace the differences in thinking, culture and approach and fund them. The second and third order consequences of lots of small changes will be less; most good results will be unexpected. That is the essence of solving wicked problems.

Fail fast. This is the mantra of the tech era; the ethos is do things fast and learn from what works and does not. For governments, this is a culture shift as the natural instinct is to slow things down. But in a world of tight budgets hitting in months rather than years, the unintended and unexpected consequences of delay, prevarication and obfuscation can push another billion people into poverty across the world. This stress will lead to conflicts and mass migration (as in Ukraine) appearing all over the world.

This is indeed a tipping point for the world in so many ways. But from adversity comes opportunity and there is a clear direction to follow.